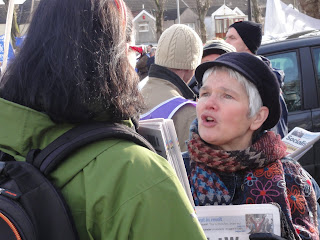 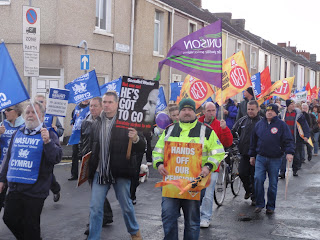 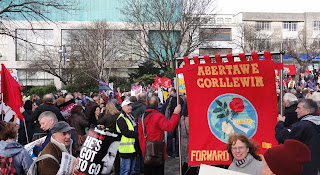 The aftershocks of the strikes and protests of November 30 are still travelling around the body politic. It’s clear that Cameron was caught off-guard by the size not only of the strikes but of the protests and demonstrations too. Quite interesting how eager the Eton toffs and their media lackeys were to believe their own ill-judged propaganda. The prearranged media ‘line’ was that the strikes were to be, in Cameron’s words, ‘a damp squib.’ The Sun’s headline the next day was: “The (not so) general strike.” The arrogant numbskulls never considered that millions of people were going to be directly and personally involved in the action and therefore would have the evidence of their senses to go on as well as the anodyne pro-free market mystifications of the mainstream media. For the hundreds of thousands who took to the streets and experienced first-hand the size of the protests, Cameron’s comment seemed completely out of touch, forcing him to retract his smug blurt.

Local news reporters could not but see the sheer numbers on the streets. However, the spin in my local daily the South Wales Evening Post was that, instead of attending the picket lines, protests and rallies, people ‘just went shopping’. I am sure that some of those on strike did just that. It is always a minority who go on the early-morning picket (how could it be otherwise when, officially and legally, you are still only allowed six people?) It is a larger number who go on demonstrations, but still you wouldn’t expect the whole staff of a school, for example, to attend a demo.

Just let me just take the city I live in, Swansea. I have been here for six years, taking a keen interest in local popular protest and industrial relations and I have never seen anything like the size of 30 November. The local press put it at 1500: it could well have been 2000. Talking to others who are long standing trade union activists, they say the last time there was anything of this size was the huge anti-Tory protest when Keith Joseph visited the town in 1981.

Talking to people in other parts of the country, the same thing is reported: that the strikes were massively supported and that there were huge demonstrations in most towns and cities. And of course what happened when the large rallies finished? Many of the protestors did some early Xmas shopping, or flooded into the cafes and pubs. If the media are serious about harping on about this, rather than seeing it as some failure of militancy, shouldn’t they consider campaigning to give people time off work (with pay) each week to go shopping to stimulate the economy? And, by the way, have they considered the reverse impact on the shops of Swansea and elsewhere if large numbers of the big public sector workforce in the city are made redundant in order to pay the bankers? How is that going to affect the local economy? Why does joined-up thinking come so hard to the people who run local (and national) newspapers?

Jeremy Clarkson’s statement on early evening TV that public sector strikers should be taken out and shot in front of their families smacks of self-publicising idiocy. Difficult to know where to start to criticise him, really: that, like Gaddafi and Assad, he thinks protesters should be shot or that he thinks executing people is something to have a laugh about...I mean the guy comes across as a total wanker anyway, so this is what I’d expect him to say. All public sector workers should at the very least boycott his wretched environmentally-destructive macho programme from now on.

But what is interesting is the non-reaction of the authorities. Poor schmucks who propose a riot on Facebook for a few seconds (or Muslim poets who write poems about jihad on the internet) go to jail for four years or to Guantanamo. No calls of “but it was only a joke” there. But a right-wing London celeb can go on prime-time BBC TV and call for strikers to be assassinated at a time when anti-strike people might well be angry, and after fascists have actually physically attacked UK anti-cuts protestors, and what happens? Not only is he not charged with any ‘hate crime’ but his employers, the BBC, and his friend, David Cameron, defend him...

The reason the vile Clarkson’s comments reverberate so unpleasantly is, to be honest, because large-scale strikes are so rare these days. Most people have forgotten the levels of media vitriol which used to be directed at strikers in the 1970s and 80s. In a recent interview, Owen Jones, author of the excellent ‘Chavs’, http://www.socialistworker.co.uk/art.php?id=26826 , compares the demonization of working-class people today with the 1970s. “When (they) were demonised in the late 1970s it was often because of their strength...’union militants holding the country to ransom’...’union thugs and bully boys.’” Now they are excoriated as ‘chavs’ and spongers, milking the welfare state. But the same class hatred is evident. I remember a 1980s Evening Standard cartoon of a train driver striker depicted as a cave man with a ‘thick skull’, and a ‘chip on shoulder,’ which would have quite rightly been seen as racist had it depicted an ethnic group. Clarkson’s talk of executions revives this sort of demonization. I heard a radio phone-in programme the day after the strike which was shamelessly whipping up hatred against public sector workers and their ‘gold-plated’ pensions. We should expect more of this as action rises in defence of workers’ rights.

The big question after 30 NOV is : WHAT NEXT? My gut feeling is that whatever spreads the action to larger and wider groups should be supported, and any attempts to ‘sectionalise’ the movement should be resisted. The idea of calling out one section at a time, as council workers at Southampton have been doing since May, is not some magic solution, as industrial relations expert Gregor Gall shows in this thoughtful piece, written in October : http://www.guardian.co.uk/commentisfree/2011/oct/10/southampton-smart-strike-union. And also this one, written in Union News after #N30: http://union-news.co.uk/2011/12/after-n30-smart-strikes-mass-strikes-leadership-determination-grassroots-confidence/

For some of the trade union leadership, the idea of the sectional, ‘smart strike’ is very attractive. Everybody knows that one day will not do it, but the ‘received wisdom’ among the union leadership is that members won’t come out for more than a day, because of the financial hit to their pockets. They may have a point, but one way to resolve this is to offer strike pay at an adequate level, perhaps calling on members to contribute to a strike fund, to fund-raise etc, and to campaign around this, arguing the case to the membership that more united action is necessary. There is perhaps some agitational work needs doing here. That is surely what leadership means. No?

For all these reasons, I am very dubious about sectional action, except if it is being used as a springboard to more united action. I fear that the danger is that some in the TUC may use the so-called sectional, ‘smart strike’ as a substitute for more full-on action. This sort of ‘death by a million strikes’ can end up leading members up a blind alley, creating the sense of doing something but ending up by demoralising and exhausting people, and then blaming them when, exasperated, they fail to vote for another one-day strike, thus letting the bureaucrats off the hook – “we did all we could – it was the membership that sold out!” While sectional action is better than no action at all, it should never be used as a substitute for more effective action. Sectionalism is the curse of the British trade union movement. While socialists cannot just yell “General Strike!” all the time, and while there are probably going to be occasions where, as part of a wider left movement, we end up supporting sectional, regional, ‘staggered’ action, we should always be arguing within the unions for action that will draw larger numbers into activity. The more united we are the stronger we are.

What does need to be done is for the campaign to begin in the new year with another nationwide strike. The day needs to be named as soon as possible. There should also be immediate work-to-rules wherever this can be achieved. Teachers and lecturers are already planning this. Workers in particular industries should decide what is most effective: no working out of hours, no marking, ‘withdrawal of goodwill’, whatever. But it should be united action, not something that only affects one section. There should at the same time be a sustained campaign to persuade union members of the case for more strike action. Probably best to see this as the first phase, aiming to culminate with another strike - a 48-hour one, this time - in February. Remember the pension reforms go live on 1 April 2012. If we can’t knock them back by then it’s going to be much harder afterwards.

Any attempts by employers to go on the offensive – as at Langley School in Newham, for example, where they are bringing in agency scabs, should be countered by wider, more united action. We cannot allow rogue employers to test out new attacks which will then be generalised. Alliances also need urgently to be built which unite service users with providers – this could create a Wisconsin-type situation and give strikers the political clout to knock the government back. We should be going all out to spread the action beyond simple union action, involving for example students, disabled groups and other user groups. Also linking with the Occupy movement and all other anti-cuts groups. In France, Spain and Italy the attack on pensions was beaten back. In those struggles the decisive factor was widespread industrial action combined with enormous popular mobilisations. This is the model we should be aiming at.

(Many thanks to Deni for pix!)