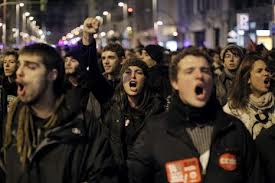 Watching protestors, strikers, trade unionists, students and young people taking part in the European-wide general strike on Wednesday 14 November gladdened my heart. This was, it seems, a ‘from-the-bottom-up’ initiative which seems so far to have been pretty successful. Of course it was patchy, looking across Europe as a whole, because different countries are at different stages in the global economic unravelling. However, despite this, it seems to have made a strong impact. Even the BBC covered it, presumably as a blessed relief from reporting its own problems.

However, even in places like Portugal where public transport strikes brought everything to a stop, not all the trade union federations supported the strike. The UGT, the Uniao Geral de Trabalhadores or General Union of Workers, linked to the ‘moderate’ Portuguese Socialist Party, did not back the strikes. The same was true elsewhere, generally where social democratic parties that have completely capitulated to neoliberalism have control over sections of the trade unions.

And in the UK there was…hardly anything. Nothing percolated through the British trade union movement, its structures atrophied by decades of rotten bureaucratic politics and strangled by the death-grip of that most reactionary social-democratic party of all, the British Labour party. If the British Trade Union Congress (TUC) had called any action, the wretched Ed Miliband woiuld have spent hours on the TV saying “strikes are wrong” over and over again…

What action there was yesterday in the UK was either from workers who have a strong rank-and-file presence, and had recently taken action, like the electricians, or those parts of the public sector that are already under severe threat, like the Public and Commercial Services union. Otherwise, apart from small public displays of solidarity, nothing happened. Oh yes, apparently the TUC wrote a letter. So that’s all right then.

The trade union bureaucracy is a special layer of British society. Their role is in managing discontent among British workers. They perform a balancing act between their members, whose subscriptions pay their salaries, and the bosses, who they negotiate with. Their politics are predominantly of the right of the Labour party, which has now become so right-wing that it is barely distinguishable from the Tories and the Lib Dems. Without pressure from below, union bureaucrats usually do the bare minimum to advance the interests of their members. Their role in society is to keep a lid on things rather like managing the steam from a pressure cooker. For this they are paid a pretty good salary: Unison’s Dave Prentis’s basic salary package for 2010 was £91,577 (this does not include other costs & benefits or his free car). Not a bad little earner for representing mainly low-paid workers. He and others like him do very well out of the system, thank you very much, and therefore cannot be relied on to rock the boat. They’re too busy getting ready for their seat in the House of Lords.

So we can’t look to them to lead a real fight. It is in the grassroots, the rank-and-file of the trade unions, where we need to organise to build resistance. We are the people who stand to lose everything. Difficult as it is (activists can face victimisation, as I found to my cost) we are the ones who ultimately must take responsibility for building and leading a fightback.

But this does not happen by itself. The trade union bureaucrats use the anti-union laws to bleat “There’s nothing we can do”. That’s what they’ve done since the 1980s. But that just won’t wash any more. For a start, there are global laws on human rights & industrial action that may well override UK laws. Plus where rank and file workers have taken unofficial action – construction and electricians – they have scored victories, and not been prosecuted. But, most importantly, we are suffering a massive ruling class attack which will tear apart the lives of British workers if we simply sit back. If the Con-Dems are allowed to win, the British trade union movement will be reduced to a shadow of its former self.

Fighting according to the UK trade union laws is like fighting with both hands and one leg tied behind your back. We have to break out of the shackles we’ve been put in. Solidarity is key here. If we all spit together we’ll drown the bastards. Ordinary people are hugely frustrated at the lack of a fightback from the official leaderships – this frustration can lead to anger and action or to passivity and inaction – keeping your head down as the shitstorm of job losses approaches in the hope that ‘maybe they won’t go for ME’. Not so – if we let them, they’ll go for everybody. Just watch them.

So if we can’t rely on the trade union and Labour party leadership, who can we rely on? Who can we rely on to lead resistance on the ground, build rank and file groups etc? This is where a revolutionary socialist party is needed, one that is embedded in the working class and whose politics are built out of struggle and the necessity for revolution. That is why I am in the Socialist Workers Party, and why, if you agree with the above, you should be too!

The unions need to take a long hard look at themselves. I love Unite Community - Unite allowing the unwaged to be part of a Union - but too many of the unions just pander to Labour who are pandering to the neoliberals. Anyone who doubts that only needs look at their complicity over workfare and benefit shaming.

Unions must change - organising part-time & casual workers, & rebuilding in the private sector, are difficult but must be done. And it must be militant - not just credit card unionism. People will join unions again when we gain some victories! We must kick out sectionalism & fight together. And build from the ground up. The members need to reclaim the unions for the rank & file. We are the ones with most to lose.