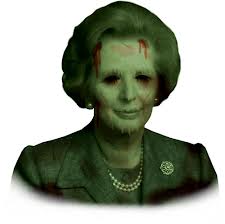 So you’re finally dead, you old bastard.
Despite the rumours, and the false alarms on Twitter
This time it was true.

It put me in mind of such a lot
But most of all made me think of a friend of mine
Who I wish could have seen this day.

When I first met John Wangford
He was a shop steward in a Hertfordshire hospital.
A porter, doing a dirty job for low pay.

He had a good, creative head on him, he hated injustice and one of the things he was good at was organising at work.

While he was there the porters became notorious as a stroppy bunch of bastards
Who would walk out at the drop of a hat.

And he’d be there on the picket line, in the pre-dawn light, white coat on, drawing on his roll-up, his John Lennon glasses (he was blind as a bat) glinting in the firelight of the brazier (yes, brazier!) as he warmed his hands.

In fact, Maggie, you nearly came face to face with him.

In ‘81 you were scheduled for a visit to St Albans hospital
To open a ward which had been built by private subscription.

John was outraged first because it was you
And second because the ward was being built with private money.

At risk to his own continued employment,
He leaked the information of your visit.
At less than a day’s notice a reception committee was formed
And by 8am was waiting for you at the hospital gates.

You may have been dimly aware of hubbub
Behind police lines as your Daimler swept into the hospital
But as you left a half-hour later you cannot have failed to notice
The tall guy in the white uniform, with spiky peroxide hair
And an assortment of earrings, who broke the police line
And chased your car up the road, waving his fist.

In fact, his size and his hair made him
Highly identifiable at demos. As the miners’ strike was
Being smashed down the toilet by your bully-boys in early ‘85
One of the London marches was broken up by police attacks.

The national 6 O’Clock News led off with footage of John, spiky hair bristling as he yelled ‘Scab!” at a tentative-looking line of riot police.

But don’t get the wrong impression. He wasn’t a headbanger.
He loved reading. He knew his Gramsci.
I never saw him once being macho or aggressive. In fact his general politics were impeccable. He was a mine of information on reggae and ska. He once gave away all his Yellowman LPs as a protest at the artist's homophobia. At the Notting Hill carnival while taking an unwise and probably somewhat drunken piss in a side-street, he was robbed by a group of black teenagers who sprayed mace in his eyes. He was interviewed by a local newspaper after leaving hospital, clearly angling for a racist rant. He gently stressed that you couldn’t possibly turn this into a racist thing. Most of the A & E staff who had taken such good care of him were also Afro-Caribbean, so how could you?

A couple of years ago I heard he was dying
At 48
From skin cancer.
A few days before receiving the diagnosis
He'd been told he was losing his teaching job
From the start of next term.
We spoke on the phone a couple of times
He'd been writing constantly.
He e-mailed me what he'd done.
I put it up on the net.
I was going to go up and see him
At the weekend.
But then his sister rang
To tell me he had gone.
I went up to the funeral.
Sometimes, if I'm doing
A public poetry reading
I read the words he wrote
In those last days.

He was, in your terms, Thatcher
And in the minds of your friends
A nobody...
A hospital porter…
A trade unionist…
A teacher…
A good man
Struggling to survive in a shitty world.
But the values he espoused
Were better than the values of you and your kind.

And as you go to your grave
With all the pomp and circumstance that money can buy
Surrounded by an honour-guard of hundreds of armed men
Jet fighters and all the paraphernalia of death
Just let me say this:
We lost much, much more in John's passing
Than we ever will
In yours.