WHERE IS THE UK'S FIGHTBACK? 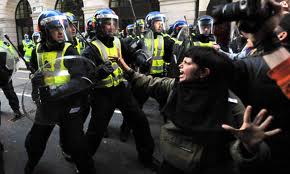 Laurie Penny’s Guardian article, ”Where are the activists as austerity bites? They have been beaten back” asked an important question. Where is the UK’s fightback? Four days later Thatcher funeral mania swept the planet, and the piece was effectively buried. However, I believe it raised some vitally important points.

Its main thrust was that state repression was a key factor in suppressing resistance to the government’s cuts. The brutal physical assaults in 2010 on student protestors and the punitive trumped-up charges they then faced, the ‘cleansing’ of the Occupy movement from St Paul’s and the eviction of the Sussex University occupation were all evidence of the state using force and intimidation where it thinks fraud no longer works. The government understands that the programme it is pushing through is going to destroy the lives of many, and that there will be spontaneous revolts and rebellions, which it will attempt to crush or neutralise.

We should not be surprised at this. State suppression of popular protest is par for the course. The police killed schoolteacher and Socialist Workers Party member Blair Peach at an Anti-Nazi League protest against the National Front in Southall in 1979. No officers were ever charged. During parts of the 1984-5 miners’ strike coalfields were under police siege, with beatings, arrests and prison sentences commonplace. Evidence is only now emerging of the framing of miners by police after an attack by mounted police on strikers at the Orgreave coking plant in 1984. In 1990 it was police violence which sparked off the anti-poll tax riot which brought down Thatcher.

Yet in truth state violence is a secondary issue for those who want to resist austerity. If the Sussex occupation had been part of a national wave of protest the police would not have felt confident enough to break it up as they did. The state can only be unrestrained in its use of force where it does not fear the consequences. To the police, student protest is not like a trade union demonstration with workers linked together through their unions and workplaces, and, crucially, able to strike. Sometimes even police attacking students can backfire. In May 1968 police violence against protesting students in Paris sparked solidarity walkouts by disgusted workers and the biggest general strike in history.

Capitalism’s neoliberal turn was made under the impact of falling rates of profit. But it was only achieved by attacking solidarity. The 1972 battle of Saltley Gates saw the engineering workers of Birmingham deliver solidarity to UK miners in devastating style, winning the strike and setting the stage for the toppling of Tory PM Heath two years later. Once in power the Tories made solidarity action illegal. The cumulative effect of the anti trade union laws introduced in the 80s was a shift in the balance of power from shopfloor workers to the union leaderships, empowering them in the policing of their members and reinforcing sectionalism. When Thatcher said there was no such thing as society it was solidarity she was attacking.

Stuart Hall shows how market forces model institutional and private life by shaping “a popular culture that extols celebrity and success and promotes values of private gain and possessive individualism”. In the absence of a ‘counterculture’,  consumerism hollows out the opposition, and the depoliticisation of the ‘student experience’ was one effect of this. Corporations prioritised the demographic, reflecting for them the importance of shaping young people’s consumer patterns early. Student unions became tools of corporate marketing strategies, and student politics came to reflect this. At the same time the failure of the movement against fees meant that student debt forces modern students to seek paid work as well as study.  Paradoxically this creates conditions in which solidarity between students and workers might be easier to achieve. Most students are, indeed, now workers.

Less hidebound by tradition and less ground down, in the past students were sometimes the first to move. It was hoped by many in the UK that the 2010 student rebellion against fees would trigger wider resistance. This did not happen. The passivity was in part about fear of police repression, but such repression has been worse elsewhere and yet could not hold back resistance. Key to the lack of generalisation in the UK is, I believe, the fact that despite a rise in the number of defensive 1 or 2-day strikes in individual sectors, organised workers are not moving in a coordinated fashion. There is no political or industrial generalisation of resistance. This is not only an indication of the fear of unemployment and the impact of the defeats of the 1980s on workers’ confidence, it is also a measure of the dampening effect on struggle of the sectionalism of the trade union bureaucracy and the Labour party.

The British Labour party has for over 100 years been the primary organisation which managed discontent on behalf of the British ruling class. As Labour was establishing itself in the first two decades of the 20th century so the bureaucratisation of the trade unions was proceeding apace. This was part of a new employers’ strategy. British capitalists had accepted that the trade unions were not going away. They could not be simply repressed indefinitely: they had to be incorporated. In the same way that discontent would be politically managed through the Labour party, so it would be economically and industrially managed through a sectional and conservative-minded trade union bureaucracy.

The failure to resist the attacks on benefits and the NHS has cruelly exposed the inability of these organisations to effectively fight or to present an alternative. British trade unions are defensive organisations whose role is to negotiate the rate of workers’ exploitation, and have historically been sectional in structure and outlook. They represent a divorce of the economic from the political. This is partly due to the baleful influence of the Labour Party, which of all European social democratic parties is the one most wedded to electoralism. Its leadership’s strategy is at all times and in all places oriented on elections, not on organising resistance that the media might attack. The fact that by 2015 the cuts will be embedded and the damage done seems irrelevant to Labour: so irrelevant indeed that Ed Balls has stated that they won’t reverse the cuts.

The strategy of political triangulation involves steering between ‘left’ and ‘right’ and adopting some of the same policies of your opponents. It is quite acceptable apparently to continue to kick the people who vote for you in the teeth to ensure the fool’s gold of the mythical ‘middle ground’ is delivered: your core voters can safely be ignored because they have nowhere else to go. So, over time, you end up with three main parties whose policies are virtually identical. It is precisely this which has seen the numbers who bother to vote steadily declining, and politicians increasingly held in contempt. This is why the xenophobes of UKIP, rather than being laughed out of court, pose as ‘anti-establishment’ and win votes. This is why the pollster YouGov now says a Labour victory in 2015 is now ‘a distant prospect.’

Some like Owen Jones believe the Labour party can be won over to  radicalism. Others, like Ken Loach, believe Labour is irredeemable and a new vehicle needs to be developed. His nascent organisation is called ‘Socialist Unity’ but unity has been in short supply in the UK far left recently, which is the other factor that weakens resistance on our side. Respect has suffered a series of splits and splinters – the most recent over Galloway’s comments about the rape allegations against Julian Assange. The Socialist Workers Party has seen allegations of sexual assault against a leading member surface at conference, leading to expulsions, accusations of a cover-up and resignations. Depressingly, the most sectarian elements on the left have seen fit to indulge in a frenzy of Trot-bashing, but then some of the left is only happy when it is tearing the rest of the left apart.

And it’s not just the Leninist left that’s having problems. The ‘networked individualism’ of the Occupy movement is also in crisis. Despite Laurie Penny’s belief that the energy and creativity of the ‘new wave of activists…is disseminated via networks rather than organisations’, the incapacity of networks to substitute for organisations has been cruelly exposed. Occupy’s often attractive version of democracy - consensus politics - was effective while the movement was moving forward. But when the police and media attacked, the movement was not sufficiently flexible or organised to defend itself. Curiously enough, allegations of rape at the London Occupy camp were also brought against a founder of the hacking group Anonymous. Although he was found not guilty, the media damage was done…

In addition, the weaknesses of loose, online campaigning are surfacing. The problem with online networking is that you can get a distorted sense of reality: you can overestimate numbers and commitment. An organisation or individual can get large numbers of people signed up to a campaign by not asking too much of them. Social networks are not effective in increasing motivation. They increase participation, but only by lessening the level of motivation that participation requires.

Perhaps Occupy can learn, after all, from the workers’ movement and the ‘old’ left. The traditional forms of campaigning and building resistance: meetings, rallies, mass demonstrations, leafletting and so forth, have not been superceded by online technology, but provide the base for it. Trade unions or overtly political organisations like the Syriza coalition in Greece or France’s Front de Gauche may well prove in the long run to be more effective in mobilising resistance than the ‘horizontalist’ model seen with the Occupy movement.

How the British left organises itself in electoral terms remains to be seen. But electoral politics is always only a reflection of the real struggle. We certainly can’t wait for Labour to maybe get elected (maybe not) only to find that it doesn’t change anything anyway. Real resistance in the present depends not on passive electoralism but on forces that can deliver direct action – trade unionists, students, grassroots campaigners, anti-fascists, socialists. We need to be organised and we need to be together. We need to avoid dissing each other’s modes of operation. We need to create unity in resistance. The fact that in Greece Syriza united separate groups under one electoral banner was a positive development. The British left has shown it can act in unity in the past – it needs to practise it in the present. Resistance to austerity will increase. Only a fraction of the cuts planned over the next ten years have begun to take effect. And if the left doesn’t benefit from this crisis, others will. The police aren't really the problem. The problem is trying to build a movement strong enough to defeat them. That's the real work. It’s time to get our act together.

Historically, workers are less likely to fight back in the middle of a recession when the attacks are worse. Fight backs often occur as the economy improves and the bosses continue to attack us. After we have accepted years of pain with promise of better times later, we fight back when we are more confident that we can actually win something. But history isn't mechanical, the future is difficult to predict but one thing is certain, if the left continues to year itself apart, we will be small and useless when the fight back does start.