THIS ACT OF CORPORATE VANDALISM MUST NOT BE FORGOTTEN... 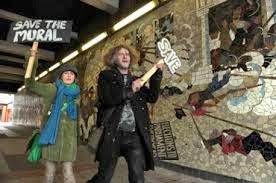 This is why the critical study of history is dying out in our schools and universities. A critical analysis of the past would mean a close study of what our rulers said and how that measured up to what they did. And, importantly, it would mean studying the dynamics of change. What drives what we call the process of history? Great men and the odd great woman, kings, queens, generals, or great masses of people – ordinary people, like you and me? And if we effected change in the past, could we do so now, or in the future?

‘Power to the People’ is a popular/populist refrain, but when spoken by our rulers it is rarely meant. Even by lowly, mundane rulers like…Newport City Council. Though I have no illusions about local authorities being ‘servants of the people’, this council’s wilful destruction of the much-loved Chartist mural days before a mass protest against such destruction is breathtaking in its arrogance. It shows quite clearly that their masters are not ourselves, citizens and electors, but big business - the bloated billionaire multinational corporate bloodsuckers who own the superstores that will go up where the mural once stood. Two things need to be said: first, that the councillors who did this must be punished – in other words, they should, if possible, be voted out of office. And secondly, funds must be raised to restore the mural – whether by putting together the smashed remains, or by constructing a new memorial.

Would the mural have been destroyed quite so rapidly and gleefully – or at all – had it portrayed not an insurrection against the state but, say, the coronation, or some other royalist or elitist puffery? I doubt it. Because, make no mistake about it, this is an attack on our class. There is a move afoot by our rulers and their cats’ paws in local government to destroy not just murals, but any potential for resistance against corporate power, by ‘disappearing’ in the ‘memory hole’ any memories of past resistance.

In Llanelli, too, we understand this. In 1911 the town was the scene of an uprising by strikers and their supporters against the military and local bigwigs.  After the soldiers of the Worcester regiment shot dead two protestors, outraged citizens torched the property of the Great Western Railway Company and ransacked the shop of the magistrate who was believed to have called them in. For decades this was hidden from history – not taught in schools or colleges and not memorialised in any way except by local trade unionists, socialists and Welsh republicans. Two years ago some of us decided to mark the centenary by putting on some events, making a banner and producing books for use in schools.  Our website here: http://1911llanellirailwaystrike.org.uk

Although we had excellent support from both Llanelli Town Council and Llanelli Rural Council (they hosted our forum, gave us a civic reception, and attended the march)  Carmarthenshire County Council was less forthcoming. They directed us to the Heritage Lottery funding stream, but when we won some money, they seemed over-directive in their desire to shape how we spent it. What was evident was a desire to keep things as bland and ‘safe’ as possible, a veritable ‘Disneyfication’ of what were after all highly politically-charged events. When it became clear that the main event was going to be a march through town at which Bob Crow of the RMT union was invited to speak, they were horrified and stopped attending meetings. It seemed they wanted a prettified, depoliticised version of history, not one in which class divisions and class conflict were sharp and uncompromising. We ended up having to return £5,000 of an Arts Council of Wales grant.

The other night I watched a documentary on the much-missed Gwyn ‘Alf’ Williams, for my money the most incisive and insightful Welsh historian of the 20th century. His book on the 1831 Merthyr Rising was a key element in my understanding of 19th and 20th century Welsh history. His insights into everything from continuity in popular resistance to myth-making around the legend of Madoc illuminated so many aspects of Welsh culture and history for me. Yet today, when I look at the way our universities have been eviscerated by neoliberalism, it seems clear to me that a modern Gwyn ‘Alf’ would never, now, be given the space to develop the insights that shed such a light on the times he studied.

It is up to us to take charge of our own history. When they smash up one of our murals we must raise it up again. When they seek to bland out working-class history, or, next year, project a travesty of the slaughter of the 1914 war, it is up to us in the campaigning groups, the left, the trade unions and the activist groupings to tell truth to power. We must take the time to study our history and ensure it is not hidden. We owe this to the past but we also owe it to the future. If we aspire to nothing else, we can aspire to be the memory of the class.