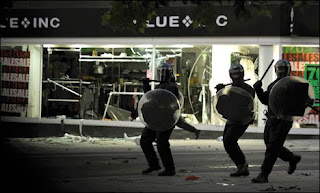 As the fires gutter out and the glass is swept up, comes the counter-offensive. The ‘fightback’, as Cameron so irritatingly called it. Over the next few days we can expect to see the punishment and public humiliation, leading to loss not only of liberty but of livelihood, and possibly homes too for the hundreds who got lifted. The courts are running 24-hours, with magistrates on the night-shift, giving an impression of the ‘machinery of justice’ running remorselessly and mercilessly.

But admitting that would open up a whole can of worms for the mainstream media. They are happier ritually humiliating poor people. So, instead of asking searching questions of a discredited establishment – a corrupt police force and a self-serving political elite - they demonise the wretched individuals dragged before the courts.

This is not at all to down play the tragedies of these riots – in particular the Birmingham deaths – and the suffering of people who have lost their homes or livelihoods. When will the right-wing press understand that because the left insist on understanding the forces that are brought to bear on events, that is not the same thing as saying that those things are right? Nobody thinks that it’s right to trash a barber’s shop. But when it happens, you have to try to understand why it happens. Because you have to try to ensure it doesn’t happen again. Above all, you have to understand that if you make poor people even poorer, while displaying the corruption of the elite establishment for all to see...well, that has consequences.

But the fact is, the Tories are on the back foot. Cameron’s “dalek-like” performance in the Commons failed to impress. The appalling Boris (‘Bullingdon’) Johnson has said police cuts are a mistake, while his leader is still making a case for them. The Tories are not really convincing over this: they should be – they are traditionally the party of ‘law & order.’ I suspect that, deep down, despite the media drivel, even they realise that something is going seriously wrong. The riots cannot just be dismissed as ‘sheer criminality.’ And they know it. 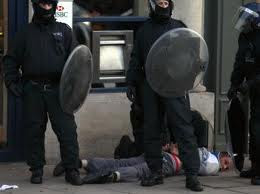