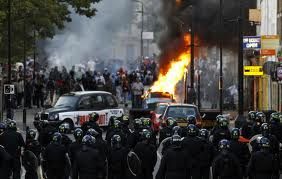 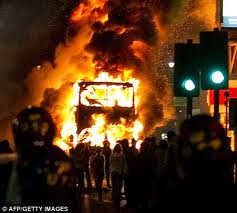 “The most violent and extensive disturbances on Britain’s streets since the second world war...” that was press reaction to the riots of 1981, when Brixton, and then later Handsworth, Southall and Toxteth exploded as aggressive policing collided with recession, long-term social neglect and unemployment.

What has happened in London over the last three days has already far outstripped those disturbances, both in speed and ferocity. They are our first large-scale neoliberal, free-market riots.

For years living in this country has seemed like living in a parallel universe to that portrayed by the media and talked about by politicians. Even before the economy bombed, the incessant privatisation, managerial ‘reforming’ of work practices, structural unemployment and economic abandonment of huge chunks of what had once been working-class areas, were creating an increasingly wretched, stressed-out populace, using increasingly powerful opiates to blot out its pain, and suffering more criminalisation in turn. Whole communities kept themselves afloat only through increasing indebtedness. And then came the economic crunch. “The good times are over,” said the pundits. What good times, exactly?

The erosion of the power of the trade unions to defend their members was important here. Their inability to defend jobs and services led to an increasingly harsh, impoverished and privatised economic model. The failure to defend wages, leading to a huge expansion of debt, led to the sub-prime disaster which triggered off the economic collapse which caused the whole deck of cards to collapse.

This is not to be too harsh on the unions. After all, low wage neoliberal economies benefit the employers. Deindustrialisation, anti-trade union laws and the defeats of the 1980s bit deep. The last year has seen the beginnings of a revival, with strikes and demos involving thousands of organised workers. But over the last few years governments wilfully mistook a sullen sense of depression and demoralisation for contentment. Just because until recently levels of industrial action were at record low levels, they decided that the working class had been successfully co-opted into the smiley, ‘have-a-nice-day’ shelf-stacking, burger-flipping corporate culture of the KFCs and B&Qs that replaced the steelworks and the car plants. So the Con-Dem coalition, calculating that they could get away with it, began cutting what decent, public sector jobs were left, truncating social housing, cutting services, making higher education prohibitively expensive and feeding the monstrous god of the budget deficit by forcing people off whatever benefits had made their lives halfway bearable.

The riots have shown that if people cannot resist in one way, they will fight back in another. Many young people who in the past might have become stroppy shop stewards, keeping management of their offices and factories in line through the threat of strike action, and building their self-respect and self-esteem in the process, are not in unions, many not even in work. Without a vibrant trade union culture capable of patrolling the frontier of control, empowering young workers to take on the managers and win, people became not workers but consumers... of products that increasing numbers of them could not afford. The images of young people looting electrical goods, plasma screens and bottles of vodka is a revolt of the shopping malls – a rebellion within a soulless, dead landscape dominated by commodities.

A cry is going up from some commentators that this is NOT like the Middle East uprisings, because, well, these kids are well off. Well off, that is, compared to Egyptian kids. Let’s be clear - just because they’re not destitute does not make them affluent. Just because they have designer labels, and an iPad, does not mean they are mollycoddled ungrateful brats with no reason to complain. These comments come from media pundits and celebrities who take home more in a month than some of these kids do in a year... Melanie Phillips and Leo McKinstry should try living in the damp, cramped flats these people live in, try going to the overcrowded, crumbling schools they attend, try doing the crap jobs they do when school is finished and they don’t have the money to go to college.

Or, our McKinstrys will say, they are not like the Egyptians because they have DEMOCRACY. Oh yeah. Three parties which are virtually indistinguishable – three cheeks of the same arse, as Galloway liked to say. All of them committed to slavishly looking after the interests of the corporations and the super-rich. Three parties which have relentlessly pursued a harshly free-market, neoliberal model, and which have flown in the face of public opinion in privatising everything in sight and fighting massively costly wars that nobody supports. “The NHS is safe in our hands” ...really? Ed Milliband is a progressive at heart...don’t make me laugh. So this is choice, this is democracy. Which would you prefer, cancer or a stroke?

“The crisis,” said Antonio Gramsci, “consists precisely in the fact that the old is dying and the new cannot be born; in this interregnum a great variety of morbid symptoms appear...” The imposition by governments of ever greater poverty for the poor and ever greater riches for the bankers and the rich is causing a wave of revolt to sweep the world. The riots sweeping Britain may be visceral and convulsive. They may not be driven by a conscious manifesto or support for a particular agenda or organisation, but believe me, they are every bit as political as the revolts that toppled Ben Ali and Mubarak.