Free Wales Army on the march? 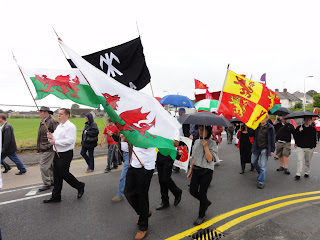 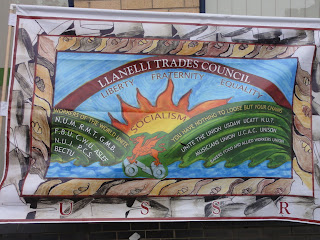 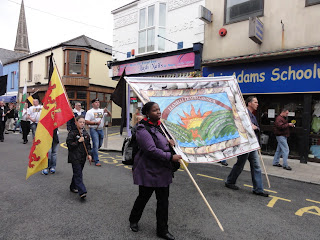 The centenary march and rally on 20 August to commemorate the Llanelli 1911 railway strike and uprising was excellent, with good attendance, good speeches (Bob Crow’s speech is on YouTube – google Bob Crow at Llanelli) and a moving graveside ceremony where the male voice choir and the service were just about perfect. It was supported by the Labour Party, Plaid Cymru and by many trade unions, trades councils and other sections of the left and the workers’ movement.

But I want to quote Rhydian Hughes’s letter in last week’s Star. He congratulated the 1911 Llanelli Railway Strike Committee on “a magnificent march and commemoration week, well organised and highly enjoyable” . But he objected to the presence of the Free Wales Army (FWA), “the ultra-nationalist group advocating armed resistance against the ‘oppression’ of the British regime.” He referred to the ‘poisonous ideologies’ of this group, and that their presence was an insult to the “countless working-class heroes who had given all for their class.”

Like him, I imagined that this organisation had died off or disappeared into the Celtic twilight long ago, so I was as surprised as anyone to see their banner among the other, overwhelmingly trade union, banners. A real ‘blast from the past’, perhaps. Their paramilitary style didn’t quite fit either, and their sartorial ambience did have, it must be said, a touch of the EDL about it. However, they have never to my knowledge publicly come out with any overtly racist or Islamophobic pronouncements – in fact quite the opposite – they are quite offended by the propensity of the EDL to sing “God Save the Queen” at the drop of a hat.Their links were always rumoured to be more with the Irish Republican Army (IRA) and the Official IRA, not fitting too neatly with the Loyalists of the far right. The anarchist Ian Bone (founder of Class War) seems to be quite happy to romanticise them on his blog.

Having said that, some socialists and trade unionists were uncomfortable having them on the march, as was I. I decided after the march was over to find out more about where they were coming from, and so at a reception in the club bar got into a conversation with a member. The conversation rapidly turned into an argument as he came out with a depressingly racist, anti-immigrant rant. In fact, so unpleasant did things become that my partner and I refused to shake hands with him, and decided to leave.

While I and others in the socialist movement see the events of 1911 in class terms, there is also a perfectly legitimate nationalist narrative which locates 1911 in a trajectory of oppression of the Welsh, from the treason of the Blue Books to the ‘Welsh Not,’ the drowning of Tryweryn etc. This is fine: socialists have always supported the struggles of national minorities. But the danger with nationalist perspectives is that they accept national and racial identities, whereas as an international socialist I doubt the validity of 'race' as a concept in the first place. The anti-immigrant racism of the FWA member I spoke to was disgusting (this wasn't 'anti-English' either - that I could have accepted - it was 'anti-immigrant'). If what he said was representative of the views of the group in general, then I for one will not be marching with them again. And I suggest you question them more closely, Ian...

'A real ‘blast from the past’, perhaps." You can say that again.
I remember seeing their Leader , dressed in a Lemmy Kilmister outfit, being interviewed by David Frost in the late 60's. He instantly earned the name Dai Dayan, after the be-patched Israeli general.
The story in Hendy was that he lost his eye changing a motorbike tyre with forks.
This is the kind of redneck we are dealing with. Inevitable, but not impossible.