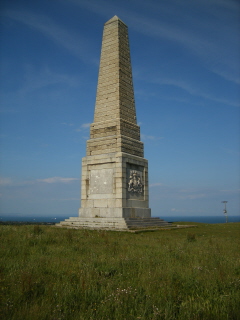 of Appuldurcombe 1781-1846. The incription is fulsome in his praise, talking of his "benevolence, kindness of heart and many virtues" which "endeared him to all who knew him." Furthermore, "as the owner of large estates he was one of those most conspicuous for the qualities which peculiarly adorn that station."

Yarborough, confusingly, is in Lincolnshire, and indeed, this gentleman was born in Brocklesby in Lincolnshire. Indeed, he was Member of Parliament for Great Grimsby in Lincs from 1803-1807 and MP for Lincolnshire from 1807-1823.
Yet for 40 years he was the dominant aristocrat on the Isle of Wight.

Despite the superlatives, it is clear that he was basically an aristocratic playboy who never had to do a day's honest work in his life. He had inherited his vast wealth from his father, Charles Anderson, who had in his turn inherited it from his great-uncle.

Charles Anderson Pelham was brought up and educated for his predestined role as one of the country's future rulers. By the time he was 22 he was an MP, while his father was Baron Yarborough in the House of Lords.

In 1806 he married Henrietta Simpson, heiress of the Isle of Wight's greatest landed estates, covering large parts of the island. As well as the manors, smallholdings, orchards and watermills, they had also invested in Newtown, buying 320 acres in the 'rotten borough' (these were constituencies that had miniscule electorates which could be manipulated, often by peers, to win undue Parliamentary influence.) Using this corrupt method, Charles was repeatedly elected MP for Newtown from 1808.

He developed a passion for sailing, and seems to have spent quite a lot of time 'messing about in boats' around Cowes, becoming the first Commodore of the Royal Yacht Club, which he remained for the rest of his life, in 1831 becoming Vice Admiral of Hampshire. When his father died, he succeeded to the title of the second Baron Yarborough and himself moved up to the House of Lords.

At the same time as this playboy was benefitting from inherited wealth and the corruption of the rotten boroughs, the poor of the Isle of Wight were languishing in the workhouses, driven from their land by the enclosures.

The obelisk towers on the summit of Culver Down, visible from across the Solent in Portsmouth, a monument to the self-interest and ill-gotten gains of the idle rich...
Posted by The Joe Hill Fan Club at 11:54