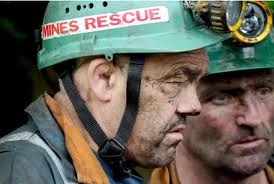 In south Wales we thought the destruction of the coal industry and its communities had at least had one beneficial effect: no longer would families have to endure the agonising wait to find out if their loved ones underground were alive or dead. We were wrong.

I remember, as a schoolboy, the Aberfan disaster, when 116 children and 28 adults died under a landslide of colliery waste from the tip that overlooked the school. I remember my father, a clergyman, driving up to the village to help comfort the bereaved.

In Alex Glasgow’s great song about Aberfan, “Close the Coalhouse Door” he considers the heavy social cost of coal. “Close the coalhouse door, lad, there’s blood inside...”With the virtual destruction of the industry, we thought we had stopped paying such a high price.

But with rising unemployment in south Wales, and with the price of anthracite – a high-value, dense smokeless fuel – rising on the world markets, little private drift mines like Gleision are being opened up again, wherever anthracite can be mined. Dangerous as it is, people come to mining out of sheer economic necessity. One of the men who died at Gleision had been made redundant from his job in February and then found work underground. Relatives said the pit was only kept going because the men could not find any other work. These are small, often owner-worker outfits.

Un-unionised and primitive, conditions in some of these places are grim. As one ex-miner commented, “There was no such thing as health and safety for these boys. It is not viable to take coal out of these small mines without cutting corners.” The tunnels in the Gleision mine looked like something out of the Victorian era.

A Swansea-based company called Coal Direct Ltd ran Gleision from 2006 until 2009 when it went into liquidation with reported debts of £240,000. It applied to open the underground extension that the men were working, but was taken over by a company called MNS Mining Ltd. The activities and safety standards of these small private companies must be properly scrutinised, and the inquiry by the police and Health and Safety Executive into the cause of the flooding must be detailed and thorough.

A major problem at Gleision seems to have been the lack of detailed information about the network of tunnels in the hillside. The men seem to have pierced an old, unknown chamber which had been flooded by weeks of heavy rain. As different companies had men working in different areas and over different timescales, stretching back over very long periods, there was no overall coordination of information about the sites of old workings. This tragedy was avoidable: it occurred because there was no agency responsible for coordinating activities overall, and keeping detailed records.

From now on there must be much stronger regulation of the private mining industry. This is a good time for the Welsh Assembly to demonstrate the ‘clear red water’ between it and Westminster by taking the initiative here to ensure that proper regulation is imposed. If we want to save lives, the deregulation and cuts to health and safety which are being driven forward by central government cannot be allowed to happen. To be really safe, of course, the mining industry needs to be completely unionised and nationalised. The lack of health and safety is a direct consequence of the reduction of trade union influence.

If nothing is done, with anthracite fetching a good price on the market, and with unemployment growing in south Wales, other Gleisions are only too possible.

Touching post, the story about the school is awful. Capitalism really is barbaric in every sense. Sadly the horrors won't stop with a little regulation here and there (even when possible) only the complete destruction of the current mode of production offers any hope.