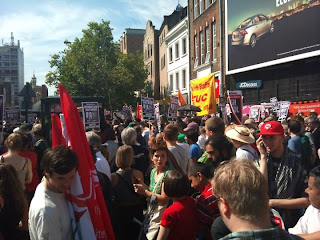 Wales UAF sent a coach up to Tower Hamlets for the brilliant anti-EDL march on 3 September. Despite a horrifically early start – 5.30 am ouch! - it was a pretty full coach that cruised along the M4, breezing in to London to reach the East End before the assembly time of 11 am.

It was a bright sunny day – one of the best of the summer – and we mingled with the crowds already starting to gather at the junction of Whitechapel and Vallance Roads. There were many union banners and people of all ages but with a preponderance of young people, all determined to stop the goons of the EDL from coming to Tower Hamlets. It was also one of the most multicultural demos I’ve seen for a long time – Afro-Caribbeans, Muslims, Sikhs (one beautifully produced banner read ‘Sikhs Against the EDL’) - including even some leftie vicars and leaders of other faiths – all with one aim: No Pasaran for the fascists. The day showed what a wonderfully ethnically rich and diverse area Tower Hamlets is, and what a powerful tradition of radical politics and action that diversity fosters. No wonder the nazis can’t stand it! It’s a living, breathing challenge to their sad racism.

A sound system had been set up at the crossroads and in between antifascist and community speakers musicians, poets and DJs entertained the crowd. There was a relaxed, carnival atmosphere as people listened to the music and speeches and ate ethnic produce from the shops and cafes. It was a time for meeting up with friends and comrades, chatting and catching up with the latest news.

As the afternoon wore on antifascists and local black and Asian youth began to gather closer to Aldgate East tube station. It was rumoured that the EDL was in the area, and the atmosphere began to grow tense as the crowds explored the nearby streets, trying to anticipate what the fascists might be planning. Suddenly, between the serried ranks of police wagons, behind trotting mounted police, could be seen flags and banners with the cross of St George. The crowd chanted its defiance – “EDL – Go to Hell!” “Nazi Scum off our streets!” We laughed at just how ridiculous and nonsensical this so-called ‘ban on marches’ was: the EDL had just marched, with a police guard, from Kings Cross to Aldgate East! The fantastic action of the RMT in refusing to transport the racists had, however, further complicated things for them, as had the refusal of several pubs in the area to serve them, prompted by the UAF’s campaign.

I spoke to a photographer who had just gone beyond the police lines. “I feel like I’ve just come back to reality,” he said. He described how horrible it had been on ‘the other side’. “They’re so angry and full of hate, “ he said. “Full of lager too I guess, “ I said. “Oh yeah, he said. “There’s loads of booze about. They’re all pissed as farts.” “The hatred, “ I said, “is what feeds them. Anger, hatred and despair is what fertilises them.” “There’s gonna be plenty of that over the next few years,” he said, “if the cuts really begin to kick in.”

As time passed people began to relax. It looked, after all, as if the nazis weren’t going to get into Tower Hamlets. Peering up the street, we could no longer see the flags, and the word began to spread that they were being escorted back to Kings Cross by the police. The tension changed into euphoria. Ignoring the ‘ban on marches’ the crowds began to surge back down Whitechapel Road, chanting as we went. People were laughing, clenched fists aloft.

Small groups of police foolishly tried to stop us, saying, “this is an illegal march” - but were swept out of the way. They equally foolishly attempted to arrest one of the local councillors but were surrounded by crowds of people chanting “Let him go!” He was quickly released and the crowd poured back to the crossroads where we held a victory rally. As UAF national officer Martin Smith said, “ Today we have won. We haven’t had anybody arrested. We have stopped the EDL coming into this borough. Tommy Robinson has been arrested. We have marched on the streets today, the EDL have gone and we have won.”

But for Wales UAF the day wasn’t over. The police had blocked off several streets so our coach wasn’t able to come to our pre-arranged pickup point. We had to walk for half an hour through an unfamiliar part of London. At one point we were directed by police down a side street. We suddenly realised it was full of EDL coaches, and what looked like a couple of hundred drunk and pissed-off EDL thugs! Unable to turn back and hopelessly outnumbered, we had a tense few moments, but managed to get through to our coach at last. I’m still not sure if this was police stupidity or conspiracy. ..

As we reached the coach we heard that some EDL had stayed behind and tried to get through to Tower Hamlet mosque, causing some damage. Details were sketchy but we heard that some local Asian youths had seen them off. We also heard that some EDL coaches had tried stupidly to drive down Whitechapel Rd and had some windows broken. Hopefully a deterrent from doing something so idiotic again.

The journey back was conducted in a rather raucous party atmosphere, and the last of us got home around midnight. A wonderful day. It showed that the so-called march ban was completely pointless and ineffectual: had the UAF and United East End not mobilised the numbers we did the EDL would have had the run of the streets. Our aim – to keep the fascists out of Tower Hamlets – was successful. Let’s hope that those on the left who thought a government ban was a good idea will now have the humility to admit they were wrong. NO PASARAN!