WHO WERE THE WELSH? 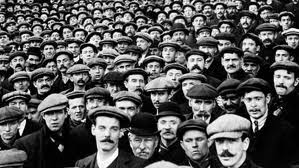 The Llanelli riots, and the other Welsh rebellions of 1910-1914, were driven by class antagonisms, rather than being in any real sense national uprisings. That they arose out of industrial conflict makes this self-evident.

But it is also the case that what it meant to be Welsh was changing in this period. Who were the Welsh? National identity is never fixed under capitalism, but fluid, depending on population flows which are determined by access to work and to a means of livelihood. Immigration into south Wales during the early part of the 20th century not only shaped the society in profound and fundamental ways, but was crucial in enabling the survival of a distinctive Welsh people and culture at all.

In drawing so many people into its growing cities and towns, Wales was unique in Britain. From the 1860s until 1914, Wales moves out of phase with England, Scotland and Ireland and from the 1890s becomes a country of net immigration. In fact, during the amazing decade before the First World War Wales is the only country on the planet to register a plus in the immigration tables outside the USA.

In “When Was Wales?”, his powerful study of Welsh history and identity, Gwyn Alf Williams notes that, “In that tumultuous decade (1904-14), when something like 130,000 people – and a mixed, polyglot, buoyant and innovatory people they were – flooded into the coal valleys of south Wales, Wales, with an immigrant rate of 45 per 10,000, ranks second, by rate, only to the USA itself as a world centre of immigration.”

Gwyn Alf argues that, had Wales not been industrialised during the 19th century, its people would have suffered the same fate as the southern Irish. ”Any recognisable entity which could be called ‘Wales’ would have disappeared in the nineteenth century, its people blown away by the winds of the world.” It was only massive immigration from England, Ireland, Spain, Italy and elsewhere that enabled the continued existence of a distinct Welsh people. Cardiff’s Afro-Caribbean community had been established, of course, since the 1700s, and was the oldest in Britain apart from Liverpool, growing initially out of the slave trade.

Not only was there a massive influx of people from outside Wales, there was also mass migration from rural Wales into the growing towns and cities. It was in this period that what we came to recognise as a distinctive Welsh culture began to emerge. The Nonconformist, radical, Welsh-speaking Wales we recognise was a by-product of industrialisation and its attendant immigration.

Without mass immigration, the Llanelli we recognise in 1911, with its chapels, its tinplate mills, its docks and its railways, would never have existed.