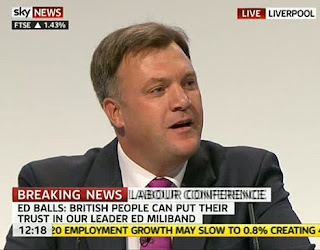 Ed Balls’s speech was flat and uninspiring. Part of the problem for Labour is that they did so little to help people’s lives when they were in power that nobody really believes them now. It is all perceived as spin and rhetoric. They had years to put things right - they could have re-opened some of the many factories the Tories closed down for example – rescuing the manufacturing industry that everybody now seems to think we should be reviving. Or they could have scrapped the Private Finance Initiative schemes that are now revealed – shock, horror – to be the scam the left always said they were.

There is a lot more than the economy that Labour could start apologising for. First on my list would be the Iraq war – there’s lots of people who are owed an apology for that. No – don’t apologise to the people who marched against the war – apologise to the families and friends of the thousands of Iraqis you tortured and killed, and the millions you turned into refugees. Until you apologise for that any other apology will seem rather pointless...

The other problem for Balls is that he is actually speaking to three audiences: one, the unimportant one, the Labour party members in the hall; the other, real, audience, those almost holy (and certainly ineffable) entities - the markets, and their agencies on earth, the IMF and World Bank. And then of course there are the overwhelmingly right-wing media, who, phone-hacking or no, must be pandered to.

To avoid alarming these august bodies, everything is pitched in neoliberal terms. But because the Tories give a more hardcore impression in these matters than Labour everything Balls says seems rather half-baked and feeble. Why vote for something that goes half way when you can vote for the real thing? Why not go for the biting, astringent cuts the Tories seem to orgasm over and which always made me feel was attributable to the beatings they received at Eton.

In any event, anybody these days who unveils a economic “five-point plan” that does not involve taxing the rich should be suspended over a slow fire for several hours. What were Balls’s rallying calls? Temporarily cutting VAT on home improvements, bringing forward investment projects and giving tax breaks to small firms. And oh yes, I forgot, using a ‘bank bonus tax’ to build 25,000 ‘affordable homes’ (really affordable? Affordable to whom?) and work for 100,000 young people, and temporarily reversing January’s VAT rise. How many homeless do we have? How many unemployed young people? These are elastoplast solutions when what is needed is surgery.

Fine the bankers the few trillion they stole from us? No chance.Tax the rich? Not a hope. Tobin tax? No way. Withdraw from a hugely expensive Afghan occupation? Don’t make me laugh.

There was no sense of urgency about the catastrophe that threatens to overwhelm us if Osborne’s cuts do what I confidently predict they will do – precipitate a depression.

The backdrop to this mundane and uninspiring speech was a deepening crisis, with European leaders struggling to save the Eurozone, bucking markets and the impending default of Greece, where some are already discussing bringing back the junta, and crime and suicide rates are steadily rising as a result of government cuts. Gordon Brown missed the chance to regulate the banks. Balls, Milliband and the Labour party are missing the chance to lead a fight against a government whose policies run the risk of dragging us into economic depression. At this rate, the Tories could easily win a second term.